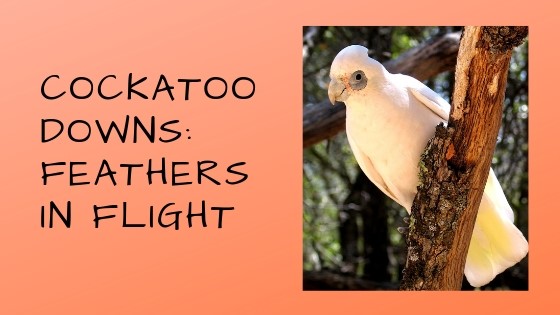 Kids were on the school playground as I rode by on my bike recently. Seeing them run and jump and hearing their screams of excitement made me happy. I remember vividly the days of my youth when running, chasing, playing tether ball, and other physical play activities were paramount in my life. Is it so in our parrots’ lives?

It certainly seems to be, as I’ve watched two generations of parent-raised cockatoos grow up at Cockatoo Downs. As the fledglings did before her, Star Bare-eyed Cockatoo (17 weeks old) zooms around the aviary, catches a boing on the fly and twirls with great glee. Her parents sometimes shed their serious demeanor and join her in brief flights of joy.

The Functions of Play Behavior

Why is it that humans and non-human animals, especially young ones, partake in physical play activities? I don’t have specific answers to that question. Even with extensive research on play, it is not yet completely understood by scientists.

However, the majority of findings conclude that play behavior apparently promotes the ability to handle unexpected circumstances, helps recover from stressful situations, and aids in the development and training of physical and motor skills.

There are different types of play such as social play and object play, and I will be focusing on physical play. Physical play is a combination of activities that gives young animals, including humans, the chance to develop gross motor skills, learn and practice physical abilities, promote and develop strength and coordination, all while happily expending large amounts of energy.

Flighted Fledgling and the Adult Parrot

Parrots were not built to sit still. In the wild, they spend most of the day flying from place to place in search of food, nesting opportunities, and partaking in social interactions.

Supplying toys to young companion parrots to engage and play with can help expend energy to take the place of wild activities. However, creating an environment for the young parrot to play and fly affords the youngster the ultimate in energy expansion while promoting coordination, skill, exploration, and confidence.

Physical exercise for our adult companion parrots is very important for their health and welfare. Giving a fledgling parrot the opportunity for vigorous physical play sets the stage for the continuation of energetic exercise into the youngster’s adulthood.

Feeling comfortable and safe are key ingredients in promoting play activities in animals. The type of play activity that takes place is influenced by what the animal can physically do.

Regrettably, most hand-raised parrots are clipped as fledglings. A clipped youngster may experience a loss of balance and fear of falling which certainly hinders the parrot’s motivation to physically play, which can limit the parrot’s development.

Play behavior apparently promotes the ability to handle unexpected situations and allows versatility of emotional responses to help recover from averse situations. Because clipping fledglings limits their play opportunities, as adults they may have less proficiency in dealing with situations such as changing or stressful environments or handling successfully social interactions.

I am always dismayed when I learn that some breeders clip the wings of their fledglings before the birds take their first flight or soon thereafter. To be transparent, I, too, practiced that when I started breeding cockatoos. That was what was preached back in the day.

I finally did see the light and I let my fledglings fly. With that came displays of the exuberance that is inherently contained in a young cockatoo. The babies would develop their physical skills by energetically flying back and forth in the house as they learned to navigate and land on ropes strung across the ceiling. Play vocalizations such as loud screams echoed throughout the house as the fledglings’ confidence and skills grew each day.

Ropes were invaluable in advancing their motor skills. Losing their balance on a wobbly rope didn’t dissuade them because all they had to do was open their wings and fly off. Falling wasn’t a concern as it is for clipped parrots. I often wonder if flying birds even have a human concept of falling. To me, falling means loss of control and eventual pain as I hit the dirt. With a flighted bird, there is no loss of control when “falling” as she just opens her wings to fly.

It’s obvious to spot adult parrots who were clipped when young and did not have access to robust play exercise using their wings. Generally, as there are exceptions, they turn into perch potatoes with little to no motivation to move around or explore. They show dependency on their human caretakers to move them from place to place. They may be more sensitive in stressful situations and they can be more fearful of changes in their environment. And the list goes on.

I believe allowing parrot fledglings to keep their fully functioning wings is a welfare issue. Young parrots play if they are healthy, well-fed, and safe; but not if they are under stressful conditions or in a stressful mental state which a clipped fledgling may very well experience.

Watching a newly fledged parrot try to fly for the first time with clipped wings is truly a heartbreaking vision. A vastly important part of avian physical play has now been shut off for the youngster. An open door that would entitle the young companion parrot to a healthy mental and physical development has been rudely slammed in her face.

Even though scientists have yet to completely understand play behavior, we shouldn’t let our parrots be deprived of physical play; if for nothing else, it seems to be just plain fun for parrots to do. Just ask Star!

Star is expanding her social circle and skills. Avian trainer and good friend, Kathryne Thorpe, came to visit Star recently. She spent time in the aviary feeding Star’s parents yummies. Star came down to the perch after giving Kathryne the once-over and preceded to eat from the treat bowl with Kathryne continuing to feed a parent. Comfortably accepting a new person in her aviary was a big step forward for Star.

Ellie, my adopted Bare-eyed Cockatoo, is making great strides with the new behaviors she is learning. The newest is learning to fly to my hand. In the video, you will see the steps I took over several days to get to our goal behavior of flying to my hand. The important thing to remember is to make small steps towards any goal behavior. (The video has been shortened because of length.)

So You Think You Know Why Animals Play, Linda Sharpe, Scientific American, May 17, 2011.

Chris Shank’s love of parrots and knowledge of animal training began several decades ago. Her professional experiences include a degree from the Exotic Animal Training and Management Program at Moorpark College in California, an internship at Busch Gardens’ parrot show, work as a dolphin trainer at Marriott’s Great America in Santa Clara and later in Hassloch, Germany.

Her love for cockatoos came after a relocation to the Philippines. Once back in the United States, she established her aviary Cockatoo Downs, where she has regularly offered training and education to parrot owners for many years now. She is an internationally-recognized expert in free flight.

I am an IAABC Certified parrot behavior consultant who successfully helps parrot owners to resolve behavior problems and train their parrots. I also help determine the best diet, social and physical environments to help that individual parrot flourish. View all posts by Pamela Clark, CPBC